In November 2017, the share of token sales that reached their hard cap (maximum amount of collected capital) was just 23%. How is it that only less than a quarter of the ICOs were able to reach their cap?

It should be noted that there were certainly better times for token sales in 2017. As recently as June 2017 – just three months earlier – 93% of the projects reached their hard-cap. However, the success rate dropped month after month until it reached the level in November.

Below is the graph showing the success of ICOs dropping from June highs to November lows. Data from Coinschedule.com and TokenData.io 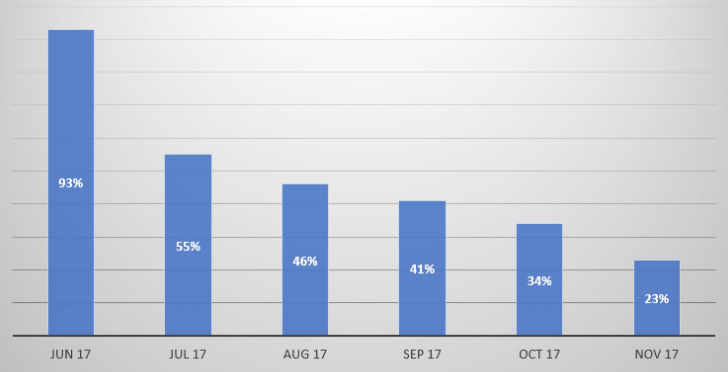 Why is the success rate so low?

One can very well speak of a hype when it comes to ICO investments. One could observe that many investments were made with little consideration and rationality. This had led to extreme funding amounts and resulted in many projects being financed to the tune of millions in the shortest possible time.

This situation seems to be changing at the moment, possibly also driven by investors waiting for initial returns. Unlike shares, for example, these are somewhat complicated to understand. In most cases, ICO’s utility tokens are issued – in this case, investors are hoping for an increase in value. However, this can only be done in the long term if the project has an appropriate substance and users are willing to pay for the service. In the course of the hype, very high expectations were already fed into many of the projects – whether these values can really be generated, however, remains open.

So it seems investors are becoming more cautious. As if success were concentrated on a few, good and large projects. As if Mr Pareto was right once again.

On the other hand, the supply side of projects is also significantly larger – more and more projects with less substance and potential for true innovations have come onto the market, which makes it a more competitive field.

Why Every Bitcoin Fan Should be Excited About Schnorr Signatures