A historic event has occurred in the world of cryptocurrencies. Venezuela has gone full speed ahead and has endorsed their own national cryptocurrency, the Petro. The Petro does not fit the full definition of a decentralized cryptocurrency or a stablecoin. But what it does demonstrate is the willingness of an independent sovereign nation to adopt the use of a digital currency. And that fact is huge in the evolution of cryptos.

The concept behind decentralized cryptocurrencies was initially to be free from governments and the traditional banking system. The reality is, governments and the traditional banking system are playing a big part in the evolution of cryptocurrency adoption. Ripple’s (XRP) xRapid platform for cross border payments went live on the 1st of October. The CEO of Ripple has said that the payment system will be utilized by dozens of world banks by the end of 2019. US Bank and PNC bank are already clients of the xRapid payment platform. XRP is the 3rd largest market capitalized cryptocurrency,  capitalized currently at US $22 billion. The recent gain in XRP’s value can be attributed to integration with the current banking system, and not independence from it. The integration of cryptos, banking and governments is what is assisting the adoption of cryptocurrencies not the independence from them.

Venezuela’s President publicly stated that the Petro can be purchased through 6 of the world’s largest cryptocurrency exchanges already enabled to operate within Venezuela. The Petro may not be the best choice for investors in cryptocurrencies, but it is a choice that is endorsed by the Venezuelan government. The Venezuelan government has adopted the use of a cryptocurrency and the exchange of other cryptocurrencies within their borders to purchase goods and services. That is the point that needs attention, not the investment value of the crypto that is being endorsed. The statements by President Maduro are clearly another example of how integration with governments and traditional banking has helped further the adoption of cryptocurrencies.

President Maduro, is the first leader of a sovereign nation to endorse the adoption of cryptocurrencies within his country. The Petro will be made available to be purchased by the citizens of Venezuela November 5 through the national currency the Bolivar. The citizens of Venezuela also have the right to choose other cryptos, which many have done already.

The United States Dollar lost ground against Bitcoin this week. The USD started the week pairing with Bitcoin at an exchange rate of $6437 / 1 Bitcoin. The pair ended the week exchanging at a rate of $6538 / 1 Bitcoin. Bitcoin gained a 1.57 % advantage over the USD by the end of  the week. 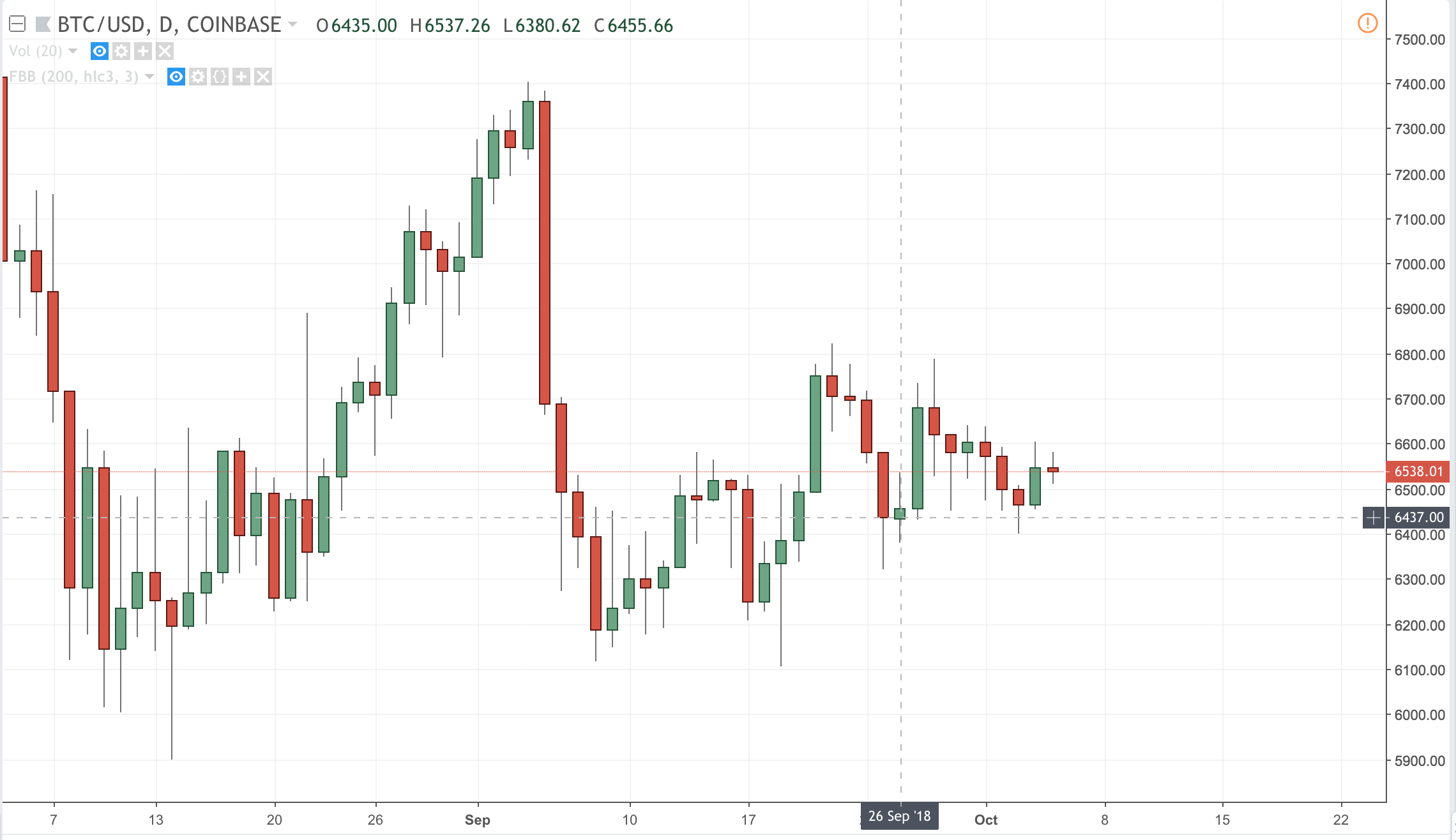 Bitcoin continued to demonstrate stability this week. Bitcoin maintained levels above its lower resistance level of $6200.

The USD index (.DXY) compares the USD to 6 globally dominant currencies. The USD gained ground when compared to its global counterparts towards the end of the week. The .DXY index recorded a value of 95.3 at the beginning of the week. The Index closed at 95.72 recording a 0.44% gain in value by the week’s end. Many analysts believe the gains recorded by the USD are a direct result of the US jobs data. Private payroll data was higher than the forecast predicted by many analysts. The Labor report coupled with the Federal Reserve Bank’s intent on raising interest rates in December have given the dollar strength as we enter the last quarter of 2018. The USD held an advantage over the EUR. Starting the week exchanging with the EUR at $0.8611 and ending the week exchanging at $0.8688 with the EUR. Allowing the USD to gain 0.89% against the EUR by the week’s end. While the Great British Pound maintained a slim advantage over the dollar by the close of the week. The GBP ended the week marginally  stronger compared to the USD, pairing with the USD at $1.3035 / 1 GBP at the beginning of the week and closing the week recording an exchange rate of $1.3093 / 1 GBP a 0.445% increase in value against the greenback.

Bitcoin continues to hold the line. The price of Bitcoin remained stable for another week. Bitcoin closed the week recording a level near $6,560 parallel to and approximately $250 above its lower level of resistance. What does the future hold for the price of Bitcoin? How long will investors have to wait for the bull run, of all bull runs, to take place?

The crypto media gives attention to the words of Mike Novogratz, CEO of Galaxy Digital Capital Management, a crypto investment firm. Mr Novogratz is of the opinion that Bitcoin will not break $9000 this year. A few months before Mr Novogratz offered additional reasons for his  year end price prediction. Along with the recurring theme about adoption, Novogratz gave a time frame to his theory of crypto adoption. He believes mass adoption is still 5 to 6 years away. But many institutions will be involved in cryptos and blockchain solutions within the next 2 to 3 years.

There are still varied opinions regarding where the price of Bitcoin will be in the upcoming weeks. One thing that can be referenced is the trend set by the trades over the last 2 years at this same time. A time of euphoria for those that were involved. Bitcoin spiked at the end of the last two years. The investors that caught that wave are still sitting pretty. In September of 2017 is when the last bull run started. Bitcoin climbed from $3,600 in September to $17,600 by December. In 2016 Bitcoin climbed from $620 in September to $960 by the end of December 2016. In both years the highest trade of the year occurred in the month of December.

Many financial instruments develop cyclical patterns. Bitcoin is still writing its own history. The pattern that Bitcoin has established over the last two years deserve attention. The 21st Money Team will continue to keep you informed as to the price movements of Bitcoin as we approach the end of the year.

The Securities and Exchange Commission of the United States has designated Initial Coin Offerings (ICOs) and the tokens that result from them as securities. That’s still such a complex definition for a product of this nature. When you participate in an ICO most times your investment is centered around a concept or an idea. It is not based on a physical product that has come to market and is being purchased by consumers. It is an idea and concept that can only be described on paper. And hopefully one day be sold to consumers.

What has to be decided as an investor is whether or not the idea will be successful enough to become an actual product. And will that product gain popularity and create sales and revenue for its investors? How do you know if an ICO or its resulting token is a good idea? Much of the investment strategy that goes into that decision depends on how many other people think that ICO is a good idea as well. In other words how many investors will be involved in raising capital for the proposed idea besides yourself?

The 21st money Team is investigating the investment opportunities surrounding the Pillar Token project (PLR). Pillar has passed the ICO stage and is now a token listed on the largest and most popular crypto Exchanges. The Pillar project is working on creating an app that functions with your mobile devices as a crypto wallet. The app is able to interact with various cryptocurrencies. It is also designed to function as a safe-house for the personal information you share with the internet when trading cryptocurrencies.

PLR describes their application as a personal, secure, easy-to-use interface to the world of cryptocurrencies and tokens. The features it offers are ERC20 token storage, transaction notifications, personal connections with buyers and sellers of tokens, and end to end encrypted messaging. PLR ranks 161st compared to other cryptocurrencies with a market capitalization value of $28,220,000. PLR last traded at $0.104 up 24.85% for the week.

It is always advisable to maintain the bulk of your cryptocurrency wealth in an external wallet not continuously connected to the internet.


This week’s Biggest Winners in Cryptocurrencies

Crypto Chart of the Week

MEDX (MEDX) ranks 160th on the list of cryptos ordered according to their market capitalization. MEDX’s current market cap is $25,240,000. MEDX describe themselves as breaking down the current silos of health information and redistributing the sovereignty of health information back to each individual. $16,000 worth of MEDX changed hands October 5th at an average price of $0.00900210

Heard Through the Grapevine

BX.BET (BX) Sale Starts October 8 Sale Ends November 5 / Creating a whole new betting experience, where any user can take over the role of the bookmaker, create their own markets, place and offer bets with self-determined odds, and even participate in the outcome determination of a market

CINDX (CINX) Sale Starts October 8 Sale Ends November 18 / Providing a platform that allows investor to choose a manager for his or her portfolio and securely trade cryptocurrencies, for a reasonable success fee

CustomCoin (CC) Sale Starts October 12 Sale ends November 12 / An indispensable resource, providing the functionality that will allow management of the entire cycle of negotiations with customers: including Customer searches, and Signing contracts

Putting things in perspective: Where is bitcoin right now and where can it go?

This week's crypto market winners: NAS, SC, MKR, NEXO. What is the reason behind their mini-rallies?