Home » EOS is live and kicking, everything else will soon be water under the bridge
News

EOS is live and kicking, everything else will soon be water under the bridge

The EOS mainnet is finally live after a series of issues that have not gone according to plan, to say the least. To make matters worse, new vulnerabilities and issues are being found out even post-launch. The latest one is related to the upcoming vote that will decide the inaugural 21 block producers of the network.

The mainnet was officially launched by a publicly streamed vote where around 100 potential block validators unanimously answered “go” to the question if they are prepared to launch. After the mainnet went live, the EOS community (token holders) was supposed to hold a vote and decide the official 21 block producers that will actually kickstart the network and make it run. The network will require 150 million EOS tokens (15% of the total supply) to vote before becoming fully activated; if you are an EOS holder that wants to vote, full instructions on how to do so can be found here. The election officially began on June 10th at 13:00. Currently the vote is well on its way and around 3.07% of coins have announced their picks.

The voting is clearly alive and kicking, so what seems to be the problem you may ask? Well, the problem is in the fact that the original plan after launching the mainnet was to have the delegated voters’ election overseen by 21 appointed block producers (ABPs). These ABP’s were to be selected randomly and once the vote was completed the ABPs were to hand over the network oversight to the elected BPs.

However, a screenshot of a conversation with one of the EOS telegram admins has revealed that the original plan has been abandoned. The full screenshot is posted right below: 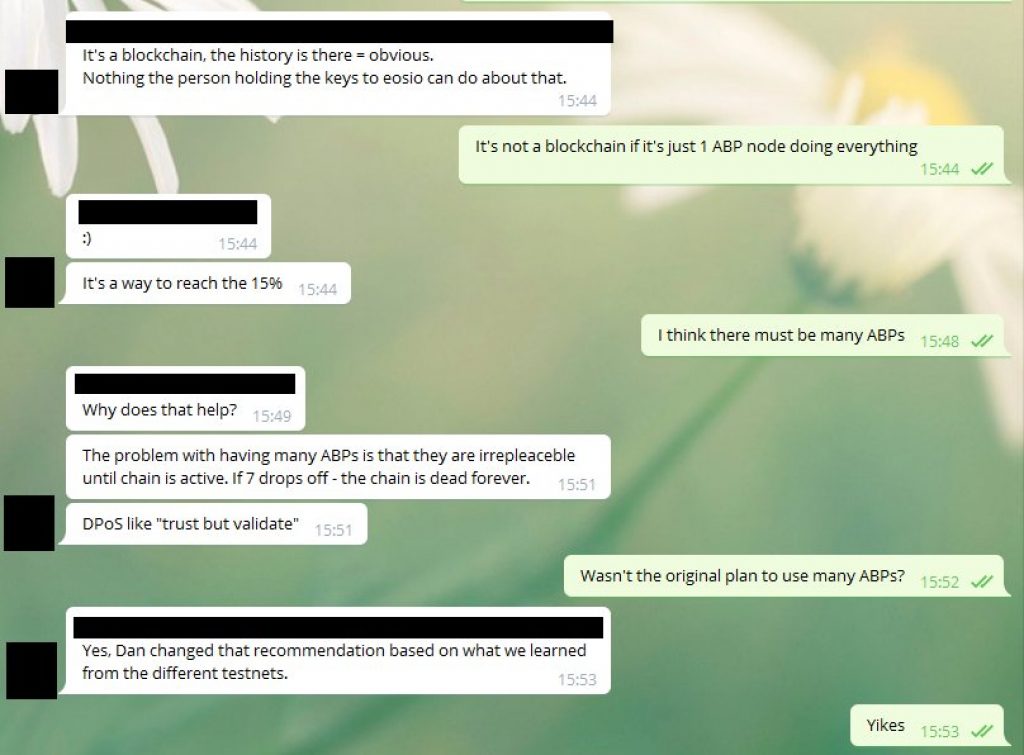 As you can clearly see, EOS team (led by Dan Larimer) felt that a model with multiple vote overseers could potentially kill the mainnet before it even went live. Single ABP model has been confirmed in the already mentioned live conference during which the BP’s gave their mainnet go votes. Skip to 56:00 on this video and you can hear David Moss, senior developer at block.one say:

“I have selected, um, uh, uh…actually between EOS New York and myself randomly selected an ABP.”

It would seem that EOS’ New York was included in the selection of the ABP and right now no one can verify if the selection was truly as random as the EOS team suggested it would be. Using a single ABP definitely raises questions related to censorship resistance and trustworthiness of the chain.

The entire voting process has been a mess so far. There is no official GUI that will support the launch, making the voting difficult and disorganized. This is especially shocking if you realize that the team had a full year to hire a graphical designer and create a working user interface for the vote. As a result, a number of fan-made voting portals and interfaces have been created on the fly. While some of them are useful, there is a real possibility that a scam portal will be inserted that will defraud people off their EOS tokens.

Ivan Lijeqvist, known for his YouTube channel IvanOnTech and also known as a member of the EOS Sweden group held a livestream alongside EOS’ official one during the mainnet launch. During this stream, he jumped into a conference call with the BP’s to ask them a couple of questions about the ABP. The answers he was given suggested a large amount of disorganization within the BP community itself (Ivan’s questions are in italic):

“The ABP is appointed block producer, basically the community appoints someone to act as a block producer to bootstrap the network, is that correct?

And how will that choice be done?

It has been done already. The appointed block producer was notified yesterday, I think.

Alright, why is this secrecy?

And now the ABP node is very important. The ABP will be the only one producing blocks on this chain until we reach the 15%, which means that EOS, the EOS chain is validated.”

Ultimately, this may turn out to be a non-issue. ABP will overlook the initial election and EOS holders believe that it’s in his best interest to not perform any malicious actions. Still, this does highlight how difficult it is to create and manage a single blockchain, let alone one that stands behind 12 billion dollars in market cap. Hopefully the EOS team has weathered the most of the storm by now, as consequences of a potential EOS downfall could send negative shock-waves through the entire crypto market.

Death bet on an Ethereum blockchain