Ethereum’s blockchain is the most popular for those crypto projects that decide to finance themselves through an Initial Offer of Coin (ICO), as many of these use the ERC20 token standard to launch their tokens. However, as the popularity of ICOs diminishes, the price of Ether, Ethereum’s token is also dropping.

Or so explains Brendan Bernstein, the founding partner of Tetras Capital, an investment fund focused on blockchain.

As price and ICO volume fall, however, that feedback loop can be as strong to the downside pic.twitter.com/R24I2Xu6Ya

According to Bernstein, it seems that the more money is invested in ICO, the higher the demand for Ether (ETH), the higher its price. But this relationship also works in the opposite direction, so the fall in the popularity of ICOs would be putting downward pressure on the price of ETH. And as this price falls, ICOs become less attractive and those who raise funds in ETH lose capital.

In addition, Bernstein makes an important point when examining the possible relationship between the price of ETH and the ICOs. Since these projects usually raise funds in ETH, it is to be expected that they will have to sell this crypto currency in the market in order to cover their operating expenses, which could have a downward effect on the price of ETH by increasing its supply in the market.

If we look at the graph presented by Bernstein, we can see that the amount of ICOs collected (expressed in dollars) and the price of ETH seemed to behave in a similar way. 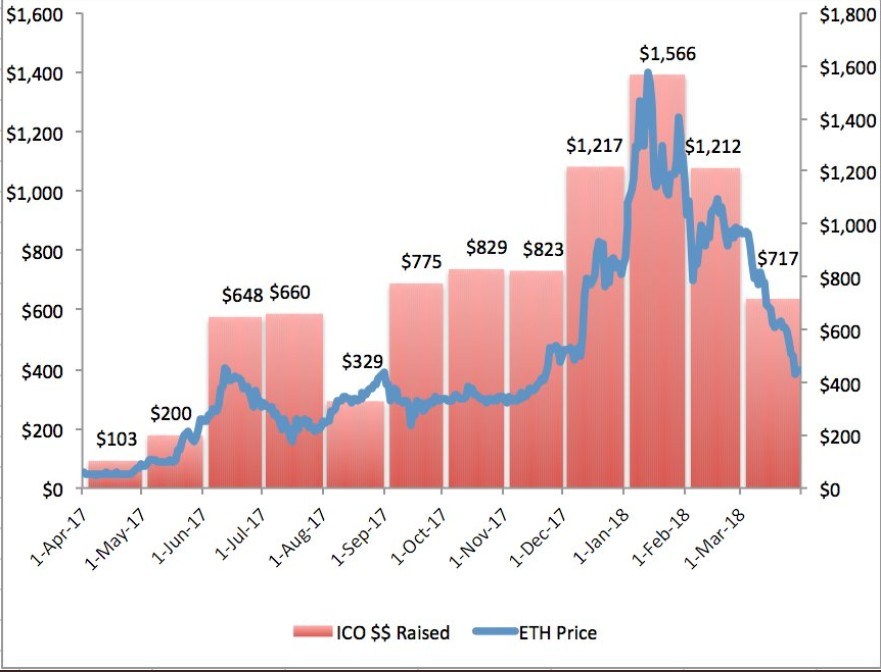 It may be relevant to supplement this chart with information provided by ICOBench. If we look at the graph above, we see that during the first quarter of the year the amount of money raised by ICOs has decreased month after month, however, when looking at ICOBench data we will see that the number of ICOs held during this same period of time has always been on the rise, so it could be argued that the drop in collection has been due to the fall in the price of the cryptomarket (including the ETH) and not vice versa. In fact, 244 ICOs have already been made so far this April, so this trend does not seem to be slowing down. 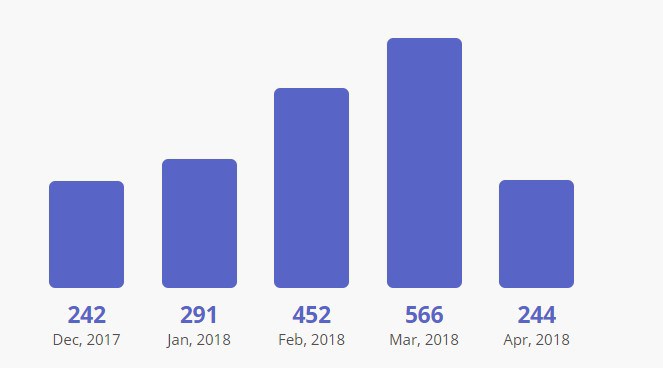 What happens is that during the period of time that is in the Bernstein graph most of the cryptocurrencies had a performance more or less similar, during 2017 both Bitcoin and the rest of the cryptocurrencies had a very positive performance, so the rise in the price of ETH and the popularization of the ICO that is observed in the Bernstein graph could be explained simply as a natural consequence.

In addition, the fall in the price of ETH and the decrease in the collection of ICOs could also be a consequence of the generalized fall in prices in the cryptomarket during the first quarter of 2018.

However, when explaining the decline in ICO fundraising and its relative decline in popularity, it is worth considering the regulatory landscape, as these types of offers are increasingly subject to regulatory pressure. For example, as of last February, the US Securities and Exchange Commission (SEC) included the ICOs in its inspection priorities, which is in addition to the total bans on ICOs enacted in China and South Korea, two important markets for the cryptomarket ecosystem. Faceebook and Google also blocked advertising of this fundraising model on their platforms. Perhaps if these bans had not been imposed, the ICOs would have been held more frequently during this period, although in general the trend is still upwards according to ICOBench data.